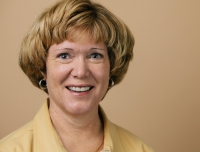 Harter has served Taylor for more than 30 years in the areas of public relations, donor relations, and philanthropy. Most recently, she served for more than a year-and-a-half as Interim Vice President for Advancement. Prior to that assignment, Harter served as Executive Director of Development—a role in which she oversaw a number of initiatives that included the Women’s Giving Circle. She also helped identify major gifts for capital projects that included Gudakunst Field (softball stadium), the LaRita Boren Campus Center, and the Euler Science Complex.

“As the role of the university president has become significantly more complex and the demands on his or her time more extreme, colleges and universities around the country have realized that a ‘right-hand’ to the president’s position is needed,” said Haines, who said this marks the first appointment of a chief of staff in Taylor history. “Sherri is particularly well-suited for this new cabinet-level assignment as it requires a person with significant leadership gifts who is committed to her Christian faith and dedicated to Taylor and its purposes. It also requires someone who is respected, confident, detail-oriented, and who takes difficult and complex projects and drives them to successful conclusions.

“I have had the opportunity to work closely with Sherri over the last year, and have watched her as she has ably and professionally served as the Interim VP for University Advancement and led the Advancement staff to very successful results. She is a proven leader,” Haines added.

“For many years, my passion has been to make Taylor’s Christ-centered education available to young people who desire such an educational experience,” said Harter. “It is an honor to serve with our high-caliber faculty and staff, and I am humbled and grateful to President Haines for this opportunity.”

Harter holds a degree in Communications from Cornerstone University, Grand Rapids, Mich., and a Masters in Management from Indiana Wesleyan University, Marion, Ind.

She and her husband Ted live in Bluffton, Ind. The couple are parents to two sons—Thad, a 2012 Taylor alumnus (wife Allison Carr) who earned a degree in Elementary Education; and Tory, a 2016 graduate who majored in Computer Science. The Harters are co-owners of Croy Machine and Fabrication.