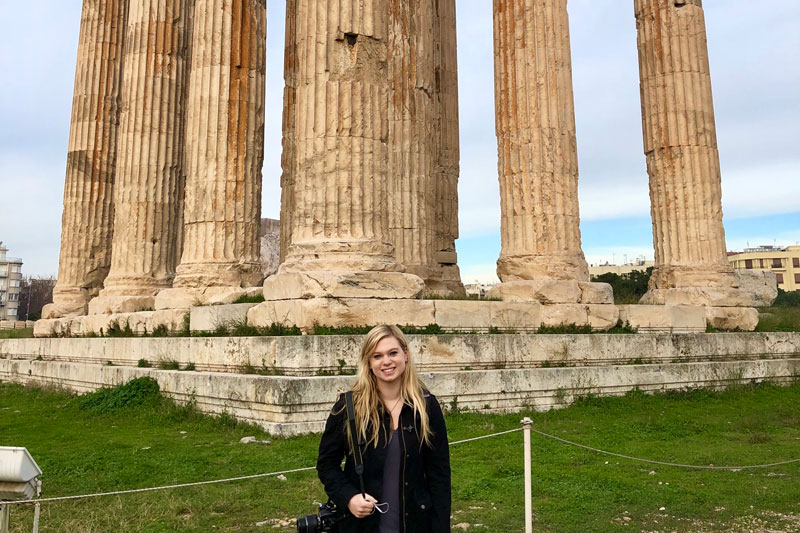 Taylor’s Invitation Program, developed and managed by Taylor professors and students, offers non-pharmaceutical lifestyle training to help members of the community. It’s a key part of the Pre-Med core curriculum, a program that’s designed to be paired with a wide variety of majors to give students a well-rounded education in health sciences.

For Grace Allan '21, Invitation played a significant factor in her application to Michigan State University’s College of Osteopathic Medicine. The program, developed Grace’s freshman year, has grown with her throughout her time at Taylor and gave her experience and direction in her medical career.

Allan, a Biology Pre-Med major with minors in Chemistry and Preventative Medicine, always knew she wanted to go to med school. Taylor’s diabetes prevention program was a large part of her Taylor experience.

When deciding on a college, knowing she wanted Pre-Med, Allan narrowed her choices between Taylor and University of Michigan. Pre-Med programs tend to have a competitive culture, and she decided she wanted the close community of professors and students at Taylor that she had heard so much about.

Many of her fellow Biology majors were involved in Invitation with her, paired with local members of the community who were at risk of diabetes. They worked with their patients to adapt their diet, exercise, sleep, stress medication, weight, and lifestyle to live a healthier, longer life.

“In undergrad, it's very rare to get patient interaction like that where you are one-on-one with the patient and really working with them,” she said. “Doing this really helps me to have something so good on my application when trying to get in. It’s very competitive these days.”

Allan also worked with Invitation last summer to research the impact of the program. She evaluated many lifestyle modification programs as a whole to see what factors kept people involved, and compared it with Invitation’s high success rate. She and her fellow senior classmate Kristen Pogue then went on to present their findings at the Indiana Physiological Society Conference as the only undergrad students there to give a presentation.

“This isn't an observation experience,” said Professor of Kinesiology Dr. Erik Hayes. “They're actually leading the sessions, and helping patients get off of medications and improve quality of life. That’s real medicine, and they get to do that as undergraduates.”

Dr. Hayes and Dr. Diane Dungan (Psychology) developed the Invitation program in 2017, the same year Allan came to Taylor. In his courses, he always makes an effort to emphasize to students how lifestyle can prevent and treat many chronic diseases such as diabetes, and how the medical system often tends to treat symptoms instead of truly helping people become healthy. After having many students come to him wanting to be able to change this, Dr. Hayes had an idea.

He knew that the CDC found that lifestyle changes were twice as effective as medication in preventing type II diabetes, and from those findings they started the National Diabetes Prevention Program. Hayes had his students do a research project to develop a program to help communities better adapt their lifestyles to treat and prevent disease, based on the CDC’s progress. He told them that if they did a good job, he’d pitch it to a local hospital.

The students did just that, and much to Hayes’ surprise, the hospital eagerly accepted it with only slight modifications. The hospital then provided the program space in the clinic across the street from Taylor, the university approved the program and granted funding, and thus Invitation was born.

Students first take a class called Health Education and Behavior Change, where they learn how to work with people in the community. This trains them for Invitation, where their clients have been previously screened by their doctors for being at-risk for diabetes and other chronic diseases.

They then shadow veteran students in the program. Once they have been fully trained, they start working in the clinic, seeing each of their patients for 1-2 hours per week.

Besides working directly with their patients, students also work in groups with their classmates and the professors, where they review patient files, discuss the wins and challenges from the week, and hear about their peers' experiences.

“You can go to any college and take prerequisites to get to medical school,” Hayes said. “But will every school train you as to what type of practitioner you're going to be on the other side? Medical school will do the medical training, we'll leave that to them, that's not our job. But we can certainly shape your view of medicine and your view of how you treat people and give you experience and mentorship in that process.”

Hayes not only sees the value of students having the experiences of working with patients and seeing their progress over time, but also of experiencing the frustration of patients when they are not making progress. Allan had multiple patients that had a hard time making changes, and she worked with Hayes through the professional and emotional difficulty that comes through this.

“Everyone wants to be a doctor, because they say they want to ‘change the world’,” Hayes said. “But the call to us as followers of Christ, is that you keep loving whether there's change or not. Christ doesn't give up on the world, He keeps going.”

Hayes encourages prospective students to think outside the box when it comes to a Pre-Med education. Although many students, like Allan, who are interested in the health sciences often choose to major in Biology, Chemistry, and Public Health, he makes it clear that anyone can be Pre-Med. He currently has a student who is a Film & Media Production major, but is taking preventive medicine classes because she wants to use her film experience to raise public health awareness. Taylor also offers majors in Human Physiology & Preventative Medicine, Exercise Science, and has even had Pre-Med students major in Philosophy and English.

“The thing I tell every prospective student is: major in anything you want,” he said. “Med school doesn’t care about the name on your degree. They care about you. Do you have experience? Do you have the right scores? Can you handle stress? Are you a critical thinker who works well in groups? You're going to learn so much more in your college preparation, and so much more for life, if you're excited about the classes you're taking, as opposed to a checkbox of what classes you are required to take. That's a miserable way to do education. Pick the major that you're excited about—Taylor has lots.”

Hayes encourages anyone who wants to be involved to consider Invitation. The program is designed to give training to students going into healthcare, and as the program expands, it has a need for all skill sets.

“It's a chance for you to come and directly impact the lives of community members,” Hayes said.  “You can work in this program for three or four years here at Taylor. We have had students and patients both in tears on their last day working together because a student is graduating and a real connection has been made.”

For Allan, her undergrad experience at Taylor was everything she wanted. She was able to have an impact through Invitation, her major, and playing on the lacrosse team.

“Between all of it, it felt sometimes like I have no free hours at all,” she said. “But that's where Taylor's community is so great because it's just so built in to everything. Time management is a really big deal when you're trying to do all that, and great, understanding friends who know you are a busy person who's trying to go to medical school is also really nice to have.”

Allan’s travels were some of the highlights of her Taylor career. She participated in multiple J-Term trips, visiting Greece, Italy, Israel, and Egypt. There, she grew close to new professors and gained a greater appreciation for her liberal arts education.

After her experiences and her mentorship by professors in the Invitation program, she has decided to pursue a Doctorate in Osteopathic Medicine. Osteopathic degrees offer a more holistic, preventative view of medicine and the body, instead of just treating symptoms of a disease. Although she doesn’t know her desired specialty yet, she knows she wants to continue helping people with chronic diseases. Allan will be attending Michigan State University College of Osteopathic Medicine in the fall, now getting her experience with a large, competitive, state-school program.

“I never saw myself doing anything else, so it was always this,” she said. “It was really cool for me to be a part of something that really took off and really grew a lot. Taylor is such a great school, it's a really special place, and I'm very thankful to be here.”