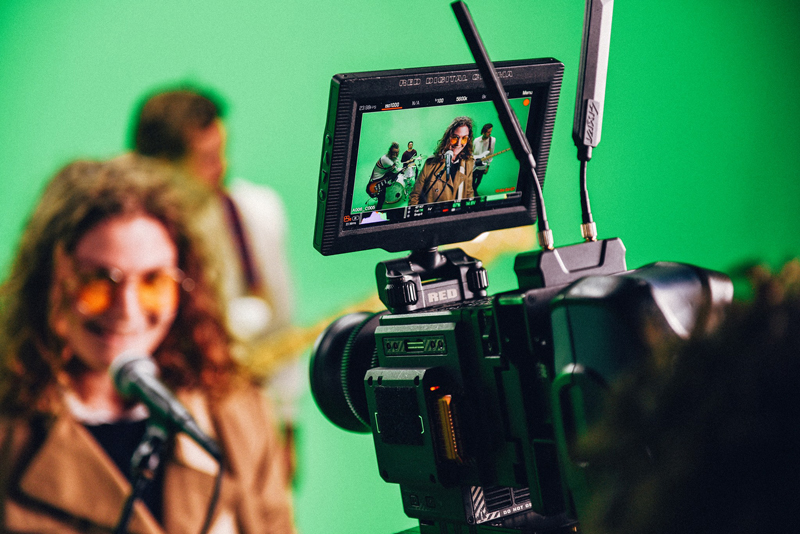 Taylor’s Film and Media Production major is an award-winning film, television and video production program with 550+ recognitions, film festival acceptances and a record 17 nominations for Student Production Awards from the Lower Great Lakes Emmy organization in 2021. Whether developing skills in screenwriting, cinematography, directing, producing, editing, sound design and more, students do so through the intentional lens of Christian faith.

Freelance videographer Landry Long ‘19 said one of the most significant opportunities he enjoyed as a Taylor film student was Taylor’s Los Angeles Internship program. He brought the lessons he learned home to Indianapolis, where he is the owner and founder of a rising production company called Sol House Film.

A passion for music and entertainment has always been woven into the fabric of Long’s DNA. He finds inspiration in the creativity and universality of the industry—how people from around the globe, even across language barriers, can come together over a song or artist they love. He learned that pursuing a film career could be his vehicle to the world of entertainment.

In late high school, Long began making short films and shooting weddings to make some money over summer break. This passion carried over into his college career when he joined Taylor’s Film and Media Production program. There, students can take immersive and collaborative courses such as Narrative Filmmaking, Documentary Filmmaking, Directing and Cinematography and Post-Production Methods to hone their skills.

Long recalls how one day, Calling and Career Office director Jeff Aupperle visited one of his classes to offer a workshop about freelancing. The workshop discussed whether participants might be well-suited for more independent work after taking an assessment with a numeric scale. Long took the assessment.

“I remember my number was absurdly high for wanting to do your own thing or create your own business,” Long said. “My mentality has always been to branch out and try a lot of different things, and the summer of my junior year is when we filmed one of our first music videos, and I figured out the entertainment world–like short films and music–is what I enjoy the most.”

Determined to dive into life as a freelance creative, Long began to pursue projects outside of his classes, going above and beyond expectations. He continued to look for opportunities to make videos for clients, music videos and short films, both for class and on his own time.

During this season, he teamed up with other Taylor filmmakers and supportive connections in the Taylor community who would remain in his life post-graduation.

“The best thing that Taylor gave me is the people that I still work with and the connections to lifelong friends beyond my job,” Long said. “They’re people who I know I’ll always stay in touch with and I will be thankful to Taylor for that forever.”

Long’s semester at Taylor’s Hollywood Internship Program allowed him to intern with the production company Doomsday Entertainment. Doomsday is known for their music videos for Childish Gambino, One Republic, and Justin Bieber, in addition to clients such as Nike, Samsung, Beats by Dre, and Old Spice.

Long’s role involved a lot of office tasks, but his proximity to industry professionals meant he got a valuable “glimpse behind the curtain,” to see what life at a production company can look like. Before returning to Indiana, Long even got to work on the set for Justin Beiber’s music video of “Yummy.”

Seeing the creative process in action was both eye-opening and formative for Long as he worked on building his own production company back home: Sol House Film. The team of directors, producers, and cinematographers is composed entirely of Taylor alumni.

“There's a whole process of pre-production that comes with so many different variables, and I fell in love with that process,” Landry said. “The idea of putting a team together, figuring out the budget…I really liked how there was so much more to it than I thought.”

One skill Long was excited to bring back to his friends at Sol House was how to make treatments: detailed PDFs or PowerPoints for an agency or label that outline the plan for the piece. Treatments may include a script summary, reference images, cinematography ideas and other attachments so clients get an accurate picture before filming even begins.

Long’s boss in Los Angeles gave him treatment templates before he left so that he could adapt his own. They’ve proved to be incredibly helpful as Sol House produces their own music videos, short films and client work.

“I wanted to mirror what I learned through that internship and say, ‘You know, this is what they're doing out there, so we need to be doing that here, but maybe on a smaller scale,” Long said. “I think more than anything, seeing the operations behind everything at my internship kind of revolutionized how Sol House works today.”

In addition to Sol House, Long recently started managing a band that he’d worked with for the past few years: Leland Blue. He’s enjoyed diversifying his skill set and discovering where his love for management, music and film collide.

Another Taylor experience that Landry said helped him develop personally and spiritually was competing on Taylor’s cross country team.

When the height of the Covid-19 pandemic brought Long’s full-steam-ahead lifestyle to an abrupt halt, he considered it a gift to be able to slow down and reflect on the lessons he learned with his team and in his spiritual life. He said this was a faith-shaping time for him, and he and his wife started a Bible study out of their home when the lockdown was lifted.

“I personally believe that I am a much better filmmaker and hard worker because athletics really enhanced it all for me,” Long said. “I’m a better person, a better teammate, and all of that stuff carries on into life and after college, so I'm super thankful that I was able to be a part of that team… People that I would call friends for the rest of my life, like the people that are in our Bible study, are all from Taylor. It's a really special place to meet a lot of special people.”

As Long looks to the future, he has a word of advice for other film students who are hungry to put their own work out into the world:

“It's so easy to prioritize those projects and how they turn out, if you get views, and all that stuff, but at the end of the day, the only thing that matters is that people like working with you and respect what you think and do,” Long said. “Anytime that’s compromised, I know it's time to take a step back and reevaluate what's really important and make sure that I'm loving the person next to me, because that's what we're called to do.”