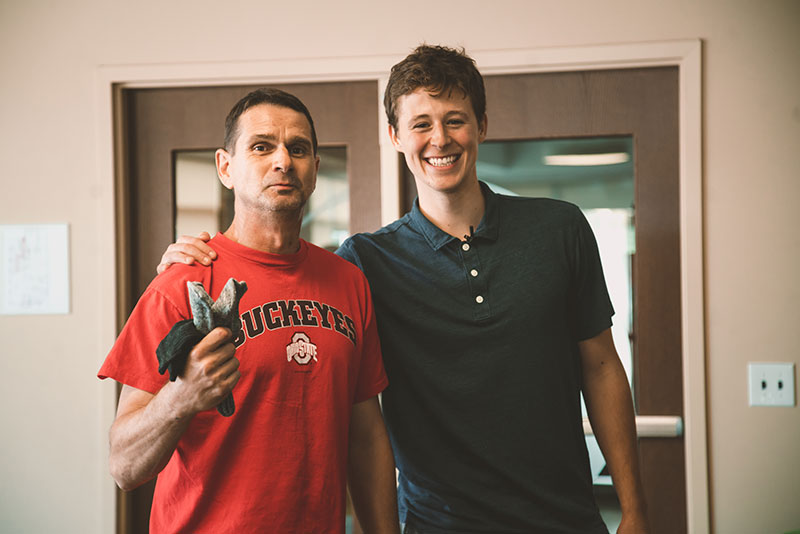 September 2021 Update: Stepping into the Future

In late 2019, Sky Outfitters expanded into a new venture: manufacturing for other businesses. Recognizing an unfilled niche, they began customizing their socks and apparel for companies in the running industry who couldn’t make their own branded products. This branch of the company, called Sky Manufacturing, quickly took off, collaborating with stores across the country.

Unfortunately, Covid-19 impacted their business, forcing them to make some tough decisions. Leaning on the lessons they’d learned from Taylor’s business degrees, they decided to pivot and focus fully on manufacturing. In August 2021 Sky Outfitters closed shop, having donated over 100,000 items to dozens of homeless shelters.

Sky Manufacturing continues to operate and grow, with plans for more products and partnerships in the future. They still offer the buy-one-give-one model to the businesses they partner with and help with other charity ventures as well. Hendricks and Cellier look forward to seeing where else God may lead them in the future.

What do 10,000 socks actually look like? Keaton Hendricks (‘18) quickly found out after his entire residence hall room was completely taken over by the colorful footwear his junior year at Taylor.

Hendricks’ couch and most of his furniture got the boot so he could accommodate the socks in his room in Bergwall Hall. Packages were stacked floor to ceiling in cardboard boxes and plastic tubs, even infiltrating Hendricks’ parents’ house for a while.

This first order of 10,000 socks was for Hendricks’ startup business, Sky Footwear, which he founded with the help of his friend and basketball teammate Eric Cellier in 2016.

Rebranded as Sky Outfitters in 2019, Hendricks’ vision has since expanded beyond socks to include beanies, scarves, and bamboo-fiber T-shirts to better accomplish his overall mission: bringing hope to the homeless.

Keaton’s Story: From Empathy to Entrepreneur

Sky Outfitters operates on a “buy one, give one” business model. This means that for every sock, hat, scarf or shirt sold, one is also donated to a homeless shelter, with a new shelter benefited every month. Hendricks’s goal is for each “shelter of the month” to receive enough socks and other clothing items to last them two years.

Hendricks’ inspiration for this method of giving began back in 2010 when he volunteered at a low barrier homeless shelter in Bloomington, Indiana (low barrier shelters accept people as they are, rather than require drug tests, have a no-pets policy, etc.). Learning the struggles and stories of his homeless neighbors ignited a conviction in his heart that continued to linger when he began college at Taylor in 2014.

“I kept thinking, ‘How do people not have socks?’ I grew up in a good situation with my family and we always had those essential items, and some people don't,” Hendricks said. “Once I got to Taylor, that stuck with me. I wanted to pursue some kind of business and I kept coming back to that passion that I had for the homeless.”

Hendricks majored in Marketing and Management and had already gained some fundamental entrepreneurship experience from another small business he created, XLSneakerSale, where he sold used refurbished shoes as a hobby.

Since socks are one of the top items homeless shelters request, Hendricks came to the conclusion that providing socks was their most practical option at the time—so he approached his friend and teammate Eric Cellier, who shared his vision to help the homeless. They often met in the Hodson Dining Commons in the morning to share ideas and shape their brand.

“We debated the name way too long—my sophomore year over Christmas break was when we finally nailed it down,” Hendricks said. “We wanted something that was short and easy to remember, and also had optimism tied to it. There were so many names we went through before landing on that, but Sky was the one we fell in love with.”

After Cellier graduated, Hendricks continued to grow Sky as a student at Taylor, making the most of the opportunities the business department had to offer. Every time Hendricks learned something new in one of his classes, he applied it to Sky. He found it especially helpful to see his accounting classes through the lens of a new business owner.

“A lot of the professors knew I was trying to pursue this business and they would offer help, and I'd meet in their office and talk through different things I was going through,” Hendricks said. “I also met some of the alumni who would come back to campus and be mentors in class, and it was so cool to connect with them. There are still business alumni who I met at Taylor who I meet with to this day.”

Other Taylor students also rallied around Hendricks’ cause. He remembers at least ten of his friends and fellow classmates (in addition to Cellier) who helped get his business off the ground and is grateful for their contributions.

Hendricks now operates Sky Outfitters full time along with two other Taylor graduates, shipping socks out of their own Indianapolis-based office space instead of a college residence hall room. Sky Outfitters has been featured by CNN, Forbes, USA Today and several other news outlets, and whether they highlight the product or the mission, the Sky Outfitters team is greatly encouraged and humbled by the recognition.

More than a Business

Sky Outfitters was built around a dream to meet needs, express love, and build relationships in the homeless community. They also seek to share the love of Christ in the way they run their business outside of their giving.

“We pray before we start the day in our morning meeting that we will be a light in our interactions,” Hendricks said. “We hope people see that there's something different about the way that we do things, like the way we catch mistakes and we let people know, even if it's not to our benefit. We just try to do things the right way, and I think that God honors that effort.”

Founding and growing Sky Outfitters not only grew Hendricks as an entrepreneur—it also grew his spiritual life. When deciding whether or not to continue the business full time after graduation, Hendricks spent many nights in prayer asking God for guidance.

Hendricks encourages students pursuing business to experiment with their ideas during college just as he did and to be unafraid to take leaps of faith while in a learning environment.

“College is the perfect time to just go after something because you really don't have much to lose,” Hendricks said. “Just try something—who knows what it could eventually be? It might be a business. With prayer and reliance on God, you have no idea how it could unfold. I'm so glad I did.”