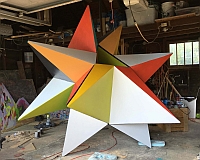 ArtPrize is an international art competition where an eclectic mix of venues—from museums and galleries to laundromats and auto body shops—display the work of established and emerging artists.

Astrobleme was selected for display by the Grand Rapids Public Museum and will be outside the museum near a pedestrian bridge that crosses Grand River.

The sculpture, which Welker describes as an “exploding star”, was only a concept when the museum expressed interest in displaying Welker’s work. It’s part of a lineage of pieces that use a square as their starting point, but, Welker says, “at the end of the day never [look] anything like a square.”

Astrobleme started with a cube modeled after the “magic cube” in Melencolia I, a 1514 woodcut by Albrecht Durer. Two opposite corners of the cube are cut off and, on Astrobleme, lead to a hollow piercing all the way through the star.

The name, Astrobleme, means “star wound” and comes from the Sierra Madera Astrobleme, a meteorite crater in Pecos County, Texas, which Welker passed while traveling through the state this summer.

The star’s points are built out from the cube’s edges asymmetrically and each panel is painted a different color, so the star looks different from every angle.

Astrobleme will be on display until October 9.

Last fall, an estimated 438,000 visitors attended ArtPrize. Two $200,000 grand prizes and eight category awards (including one for outstanding venue) will be given—half based on public vote, half by a jury of art experts—at the 2016 ArtPrize Awards ceremony scheduled for October 7. The ceremony will be streamed for public viewing at Rosa Parks Circle in Grand Rapids. The first round of voting runs from September 21 to October 1.