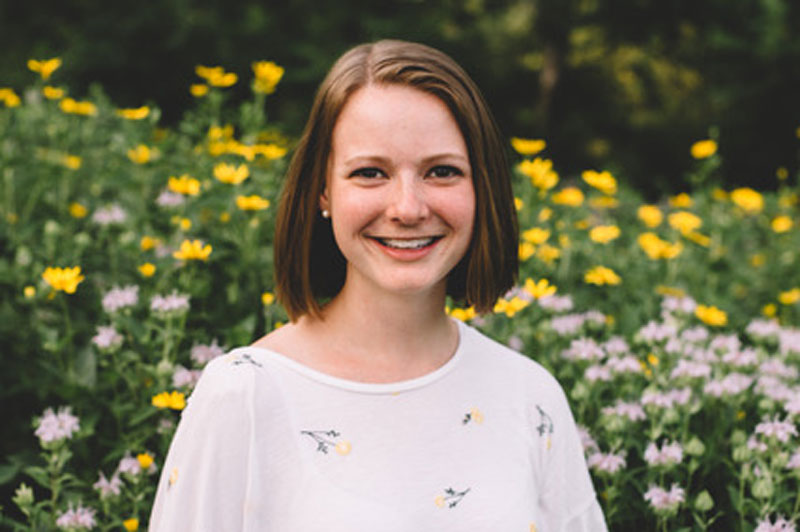 Taylor students who study communication and languages are equipped to think critically, speak persuasively, and write beautifully. Students have many outlets for hands-on experience, including working at the Writing Center, covering news for Taylor’s award-winning student newspaper, The Echo, or studying authors like Shakespeare, Jane Austin, and C.S. Lewis on the Literary London trip.

For Mylie Brennan (‘16), studying communication meant combining her love for connection with her passion for peacebuilding. She is now pursuing a doctorate program in global peace, security, and justice as a recipient of the U.S. Student Fulbright grant for PhD research. This path took her to Queen's University in Belfast, Northern Ireland, where she will study the political identities of the generation born after decades of sectarian violence.

In high school, Brennan enjoyed performing on the stage, but knew she didn’t want to pursue theater professionally. She decided she wanted to work for a business or nonprofit yet still wanted close proximity to theater classes and opportunities, so she declared a Communication major when she came to Taylor. She wasn’t sure what exactly being a communication major entailed, but soon fell in love with the program.

Communication turned out to be the perfect vehicle for Brennan to discover her passions, and she added an Applied Missions minor to supplement her studies. She loved studying gender communication, corporate communication, rhetoric, and persuasion, which would enable her to solve breakdowns in communication for companies and nonprofits.

“My writing skills improved so much at Taylor,” Brennan said. “I learned a lot about how to write succinctly and clearly, but also how to build an argument, which is super important—if you're going to be a writer of any kind, you need to be able to articulate what you're trying to say. My editing skills also improved, because we spent so much time reviewing each other's papers and were asked to think critically about writing. I appreciate those foundational skills I got at Taylor.”

In addition to her classroom experience, Brennan said she was also shaped by a long list of Taylor professors who were a positive influence in her life. One of these professors, Professor of Psychology Vance Maloney, created the Irish Studies Programme at Taylor, a semester study-abroad program that set Brennan’s career trajectory and changed her outlook on life.

While studying abroad in Ireland, Brennan was able to dive deep into Ireland’s rich history while also learning what it means to be a global citizen.

“Taylor was really foundational in starting me on this journey of wanting to be globally minded—wanting to step out and interact with people who have different perspectives,” Brennan said. “Studying abroad changed my life and opened up my perspective in a lot of ways and I grew so much. Being around people who want to make the world a better place and want to be thoughtful in their engagement with the world was something Taylor gave me that I will forever be grateful for.”

Her connections in Ireland led her to an internship for her applied missions minor, where she worked for an ecumenical organization in Galway, Ireland. While Brennan treasured her year there, what she really wanted to do with her career—cultivate post-conflict community relations—was a need that was not as relevant in Galway.

Brennan aspired to enter into the communities impacted by The Troubles, a period of sectarian violence in Northern Ireland which took the lives of over 3,700 people between 1968-1998.

“I thought about how much of my time spent in Ireland was for me and my own learning—it was for the community, too, but upon retrospect, I learned and grew a lot personally,” Brennan said. “I decided I really wanted to give back to the people here, and do something that will help me to broker peace in the future, whether it's in Northern Ireland or someplace else.”

With this in mind, Brennan returned to the States and set her sights on getting her masters at Ball State University. Using the skills she developed at Taylor, she earned her degree in Organizational and Professional Communication and Development, which confirmed her desire to study peace and conflict.

In 2020, Brennan was back overseas, this time in Belfast, Northern Ireland. Winning a Fulbright scholarship enabled her to research at Queen’s University under The Senator George J. Mitchell Institute for Global Peace, Security and Justice.

Brennan’s PhD project is titled “The Political Identities of the Good Friday Agreement Generation.” The Good Friday Agreement ended the violence between Irish Catholic Nationalists and British Protestant Unionists in 1998, and those born afterward were too young to participate in the historic Brexit vote in 2016. This generation is the focus of Brennan’s research.

“What my project is trying to gauge is whether or not young people are still as entrenched in sectarian identities as in the past generations, or if they're moving away from those identities—specifically including the impact that COVID-19 and Brexit has had,” Brennan said. “I’ll also study how their identities impact their voting behavior: what does being a woman versus being a man do, or what does being someone of a racial minority do? The latest research shows that the youngest generation is that some of them are less entrenched in their divided identities and some of them are more entrenched, so there's a lot to study here.”

Living in post-conflict Northern Ireland and studying at Queen’s gives her ideal access to the populations she wants to research. Brennan hopes her findings will fill a gap in academic research while also providing nonprofit workers, government advisors, professors and church leaders with the resources to serve this generation. With the Brexit transition now complete as of January 1, 2021, Irish communities stand on the precipice of what could be significant change.

“This youngest generation could be very, very impactful for the future of Northern Ireland, specifically because of Brexit,” Brennan said. “It's all very unsure, and because Northern Ireland shares a border with Ireland, this youngest generation is going to have to live with the economic impacts of this Brexit situation more so than the older generations. I feel that understanding where their political motivations come from will be a good predictor of where Northern Ireland is going in the future. It can guide nonprofits or community relations workers to understand what it is about this situation that makes young people identify and vote the way they do.”

A Faith Beyond Labels

While on the surface the violence between Irish Catholic Nationalists and British Protestant Unionists seems like a result of ideological divides, The Troubles were focused on economic disadvantages and social structures. “Catholic” and “Protestant” are more of ethnic identities than religious markers, and Brennan has been learning how to navigate this when sharing about her relationship with God.

One way Taylor prepared Brennan to lean into these dynamics with grace is through the spiritual development she experienced. She said being surrounded by different perspectives and learning from professors who taught with wisdom and humility influenced the way she saw the world. Living in close-knit community gave her the tools to enter conversations about The Troubles with compassion.

“My faith has given me a lot of empathy for people during the Troubles who felt backed into a corner and felt that they had no option besides violence, while asking, ‘What were they experiencing, what were they seeing, and where did that come from? What are the effects of that?’” Brennan said. “I see my faith play out in the promotion of peace and goodness and caring for those who've been left behind, because I think that's a lot of what The Troubles is about—the people who were left behind and weren’t cared for.”

Brennan looks forward to completing her PhD program and using her communication education to improve community relations in Ireland and beyond.