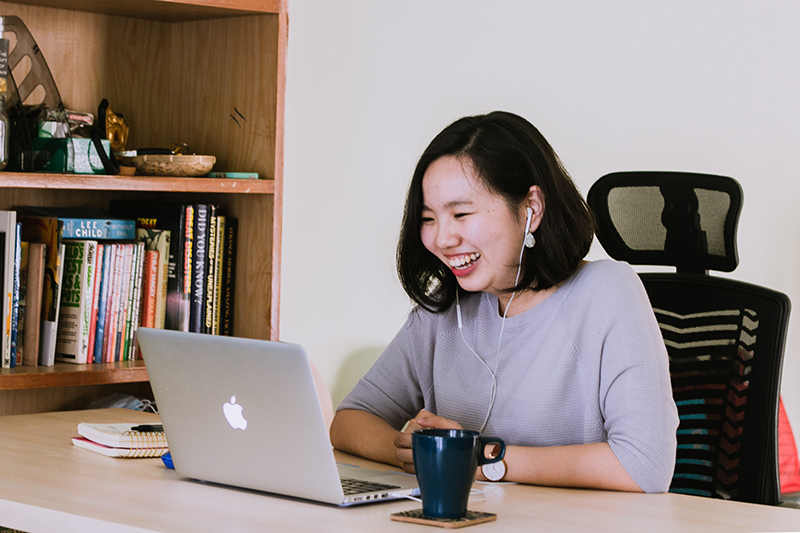 Taylor’s Political Science, Philosophy, and Economics degree is an interdisciplinary program that engages students in a variety of interrelated areas of study. Students examine the political and economic structures that determine the context for decision making and human flourishing, as well as critically engaging with the very ways that we understand the world around us. Through understanding these vital fields and how they relate to each other, students are equipped to pursue multiple career opportunities.

Chin Ai Oh ‘18 came to Taylor as an international student from Kuala Lumpur, Malaysia. Her experiences at Taylor wholistically shaped who she has become in and outside of the classroom.

While in high school, Oh thought she wanted to go into accounting, and she started an internship with an accounting firm after graduation. Although she was interested in economics, she quickly realized that a career in accounting wasn’t for her.

She thought about going into Elementary Education due to her interest in educational policy, but instead landed on a Political Science, Philosophy, and Economics (PPE) major. She also took multiple Psychology classes that have helped her greatly in her current role in human resources.

Taylor combined the three disciplines of politics, economics and philosophy into one major to help students see the way the world operates on a deeper level. It makes use of systems of thought, political action, and economic systems through hands-on learning and global engagement. Outside of the classroom, PPE majors learn through independent research projects, study abroad programs, and Taylor’s nationally-ranked Ethics Bowl team.

While at Taylor, Oh worked in the Calling and Career Office. She helped her fellow students by reviewing resumes and cover letters, helping them find their passions, and plan out their growth long-term. She then was able to graduate with the well-rounded experience of job hunting as both an employee and employer.

One of her biggest attractions to Taylor was the study abroad program, where she was able to spend a semester at University of Oxford in England. She was also active in the Asian Society for Intercultural Awareness and International Student Society through the Office of Intercultural Programming. She also worked for the Writing Centre, Taylor Theatre, and Summer Conferences. Her time at Taylor culminated as Student Body Vice President, which shaped how she viewed leadership development.

“You're communicating and a lot of representing and bridge-building, which is what I do on a day-to-day,” she said. “Whenever our employees have complaints, or things that they don't understand, it's a core part of my job to figure out what is the difference and what are the similarities between the point of view from both sides. It’s important to know how to escalate and deescalate based on what’s needed, while respecting other people’s feelings.”

After graduation, Oh joined Teach for Malaysia (the Malaysian chapter similar to Teach for America), and taught students for two years. There, she discovered just how passionate she was about being able to teach others, and how she thrived with smaller groups of instructions. Today, she is working for a startup financing company as People and Leadership Development Manager. She is involved in recruiting, training, and event planning and helps people with their career trajectories.

Find Where You Belong

Oh had wanted to go to college in the US and applied to many state schools. After several doors closed, she wasn’t sure what her next steps would be. Then, she randomly came across advertising for Taylor, and looked into it. Taylor has students from 33 countries, and understands that students from other cultures can face unique difficulties. Assistance is given to international, third-culture and missionary kids, and ethnic minority students in helping to better adjust in a new college environment through Intercultural Programming, and a specialized application process for international students.

For other international students, Oh understands the fears and discomforts that come when moving so far away from home for school.

“It is probably going to feel a little bit lonely the first month you’re at school, but take your time and know that you are there for a reason,” she said. “Give yourself and others grace and patience, get involved, and you will find where you belong.”

Through all of her involvement, Oh is grateful for what she has found at Taylor, and the eternal impact her time has had on her.

If you are interested in a Political Science, Philosophy, and Economics major, Taylor’s Intercultural Programming, or coming to Taylor as an International Student, start your application process today!