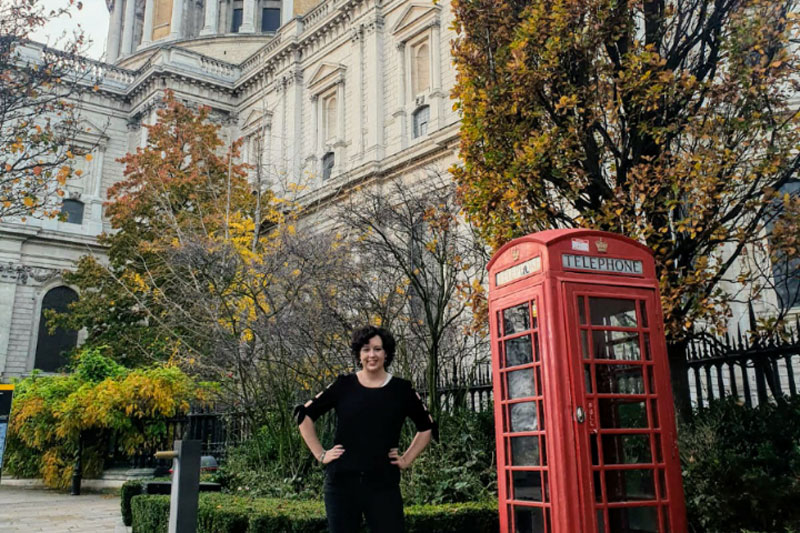 Many wistfully remember the days when going to the movies was a regular occurrence. This family pastime has been drastically impacted by the global pandemic, but that has not quelled the passions of those who are studying to make movies one day.

On December 11, 2020, Professional Writing graduate Sarah Gorman (‘19) finished her last classes at the London Film School and received her Master’s degree in screenwriting.

After years of work, determination, and no shortage of adaptability, Gorman is finally scheduled to have her graduation ceremony in January. While she is ending her academic career as a screenwriter, Gorman took an unusual way of getting there.

Road to the Screen

Gorman entered Taylor as a Professional Writing major but quickly found that being in the publishing field wasn’t for her.

“The more I did the editing class in Professional writing, which was an amazing class, I was like, ‘This is great, but this isn’t what I want to do,’” Gorman said. “I’m also not a huge fan of New York, which is where a lot of people go to get published, so I was like, ‘Okay, where do I want to move—LA or London?’ Both are more focused on film, and I had always been interested in that.”

Gorman tried to double major in film, but because of the intense workload the film majors have, it was impossible. She knew her next steps may fall outside of her chosen major, but she also said that professional writing prepared her for any type of writing.

“I asked if the Film department had a study abroad program, and they did,” Gorman said. “So I did a semester in LA through the film program and paired that with professional writing to kind of dip my toes in the water. I really enjoyed it. I took some basic classes in film and screenwriting and just absolutely adored it.”

The LA program connects students to Hollywood opportunities and allows them to gain real-world experience. While the program is mostly marketed to film students, Gorman was able to go.

“You get a bit star-struck by the whole thing,” Gorman said. “You are with all these creative people that are at the top of their game and you get to chat with them.”

Gorman enjoyed the study abroad program so much she decided that she wanted to continue her education in screenwriting. A little nervous about the transition because her undergraduate education had mostly been in publishing, Gorman began looking for a graduate University to study screenwriting at.

She looked at LA, but their degrees were much too expensive so Gorman was forced to look elsewhere. She looked across the pond at a budding film industry in Great Britain, which was not only exactly what she was looking for, but much cheaper than LA.

All the Queen’s Men

The London Film school that Gorman attended is ranked 6th internationally by The Hollywood Reporter. While Gorman was studying in London, she found many of the skills she learned at Taylor easily transferred over to ideas in screenwriting. While most of what she learned in professional writing was for the publishing world, screenwriting follows a very similar process. When it came to pitching ideas, dealing with agents, and writing screenplays she realized she had already done a lot of this before.

Gorman took a one-year program to get her master’s in screenwriting, which opened doors in the film industry and teaching opportunities in the future. She is also qualified to do Script Supervising as part of her master’s education, which will allow her to take more of an executive role on film sets and make sure everything goes according to the script.

Even in the midst of the pandemic, Gorman is optimistic about life after graduation as many are starting to film again. In an ideal world, Gorman would love to freelance between London and LA, but she is keeping her options open.

Looking back at her Taylor experience, Gorman advises students to take their time, enjoy life, and realize that they are always going to get better. In a culture that glorifies hard work and overwhelming anxiety, she encourages freshmen to take their time because they will never be this young again.