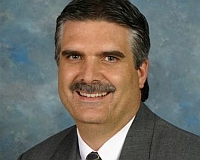 Rollin Ford, a Taylor University alumnus who served global retailing giant Walmart as Executive Vice President and Chief Administrative Officer prior to his retirement last year, will be the 2017 Seaman Lecture Speaker at Taylor University.

Ford will speak during the chapel hour at 10 am, Monday, April 10, in the Rediger Chapel/Auditorium on the Taylor campus.

During his 33-year career at Walmart, Ford served in a variety of senior leadership roles, beginning in the logistics division and later becoming Walmart’s Chief Logistics officer, where he was responsible for transforming and building the company’s global network. He also served as the Chief Information officer, having responsibility for Walmart’s worldwide technology division. Most recently, Ford served as the Chief Administrative officer, where he focused on leveraging Walmart’s scale to increase efficiency and productivity around the world and across domains to include the supply chain, technology, back office, global sourcing, and data and analytics.

Ford holds a Bachelor of Science degree from Taylor, and serves on the boards of Mercy Health, Symbotic Corporation, John Brown University, and UST-Global.

The Seaman Lecture annually brings a businessperson to campus from the broader Taylor family to speak about the importance of faithful people serving effectively in the marketplace. During the lecture, the speaker addresses areas that include ethics, leadership, stewardship and other Biblical principles.

Richard A. (Rick) Seaman, the lecture series’ namesake, was a 1978 Taylor graduate and member of Taylor’s business faculty. During his career prior to joining the Taylor faculty, Seaman served in different roles, working for IBM, Indiana Bell, and later as an investment broker for Edward Jones Investments in Marion. During his Edward Jones career, Seaman was named the firm’s most successful broker.

In 1989, Seaman became a professor in the Department of Business, Accounting and Economics at Taylor—a roll he filled until his death in 1998. Seaman’s influence on Taylor students through his business knowledge in the world of investments was summarized in the tribute of one alumnus who said, “A day never passes when I do not apply something Rick taught me.”