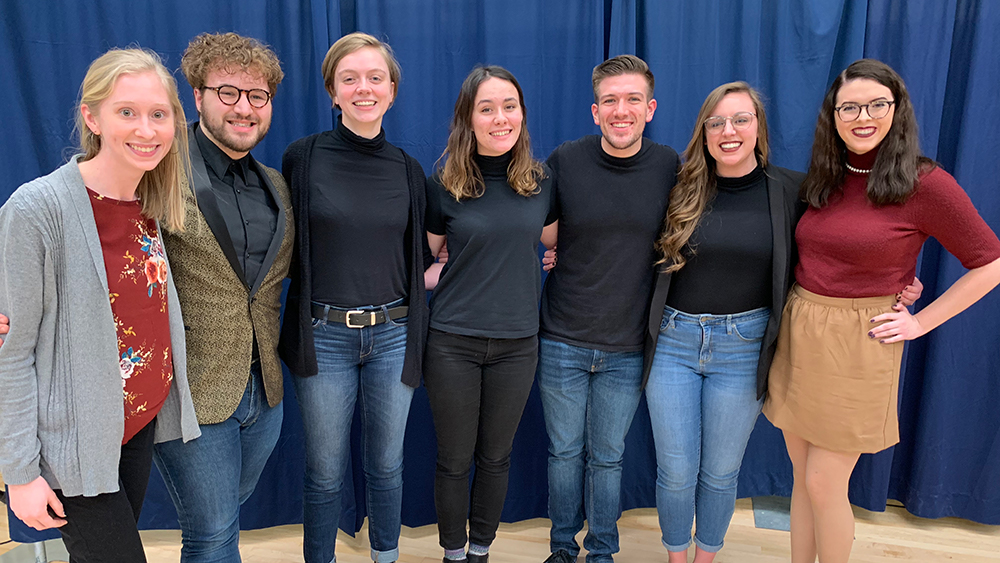 UPLAND, IN—From January 8 to January 13, 2019, Taylor University’s Theatre department took 21 students to the Kennedy Center American College Theatre Festival (KCACTF) 2019 Regional Festival. This year, the festival was held in Madison, Wisconsin, and was hosted by Madison College in partnership with the University of Wisconsin and Edgewood College. Department faculty members said the event was a good opportunity to gauge their artistic and academic progress as they met and worked with college students and professors from Wisconsin, Illinois, Michigan, and Indiana.

While there, students attended workshops taught by theatre professionals; auditioned for plays, scholarships, and jobs; and competed for awards in theatre design, dramaturgy, directing, playwriting, criticism, and more. Each year the festival committee also invites the best participating plays from the region to perform at the festival. In 2017, Taylor University’s production of David Lindsey-Abaire’s Rabbit Hole won ten awards at the festival. This year, Taylor chose not to take a show to the festival to allow the students to participate in the festival activities.

Among the numerous workshops all the students attended, Senior Bradley Jensen entered his costume designs for Taylor’s productions of Why We Must Die So Young by William Gebby, and Stephen Sondheim’s Into the Woods. He also participated in the as a director in the 10-Minute Scenes. Other participants in the 10-Minute Scenes included fellow Taylor students Amanda Hotte, Evangeline Bouw, and Hannah Embree, who auditioned and were cast. Jensen and fellow student Ethan Rice also participated in the Design Storm, where they worked with a team of other students to fully design a play. Juniors Andrew Baker and Brandt Maina were both nominated for the Irene Ryan Scholarships in Acting. They auditioned with their respective partners Evangeline Bouw and Madeline Logan.

The festival also included a Musical Theatre Intensive with Broadway professionals. The MTI offered an opportunity to audition for the Open Jar Summer Intensive, a week in New York of workshops with Broadway actors and professionals. Students Lauren Vock, Madeline Logan, Andrew Wolf, Andrew Baker, and Maina all auditioned for the MTI and were cast in the dance track of the intensive. Sophomore Madeline Logan was awarded the Open Jar Institute Music Theatre Dance Award.

According to Taylor faculty members, by participating in the festival, Taylor Theatre shared in the KCACTF’s educational goals to recognize, reward, and celebrate the exemplary work produced in college and university theaters across the nation. They added Taylor Theatre looks forward to participating in next year’s KCACTF programs and competitions.