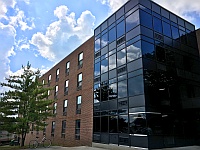 Campus officials say a $2.9 million renovation of Bergwall Hall has been completed on time and the residence hall will be ready for students to move in a week from Friday when Welcome Weekend begins.

Named for late Taylor president and alumnus Evan Bergwall, the facility was constructed in 1989 for approximately $1.9 million. The residence hall, adjoining Taylor’s Hodson Dining Commons, was originally conceived as a conference center/hotel-like structure with private bathrooms and showers. Its use has been first and foremost as a residence hall for students. Housing officials at Taylor say Bergwall Hall will house 207 students.

According to Ron Sutherland, Special Assistant to the President at Taylor University, the renovation created new common areas on each of the hall’s four floors, widened hallways, centralized community style restroom and shower facilities, and a kitchenette on the first floor. Sutherland said two rooms on each floor will continue to have their own toilet and shower facilities and that the work also includes a new exterior entrance and façade at the entrance, new drywall, and carpeting. Additionally, a new residence space for the assistant Hall Director was added.

“These renovations to Bergwall Hall will allow it to serve many future generations of Taylor University students,” Sutherland said. “We are pleased with the work that was done and are sure our students will also approve of the finished project upon their return next week for the start of fall semester.”