Preparing to Enter a New World With Lighthouse 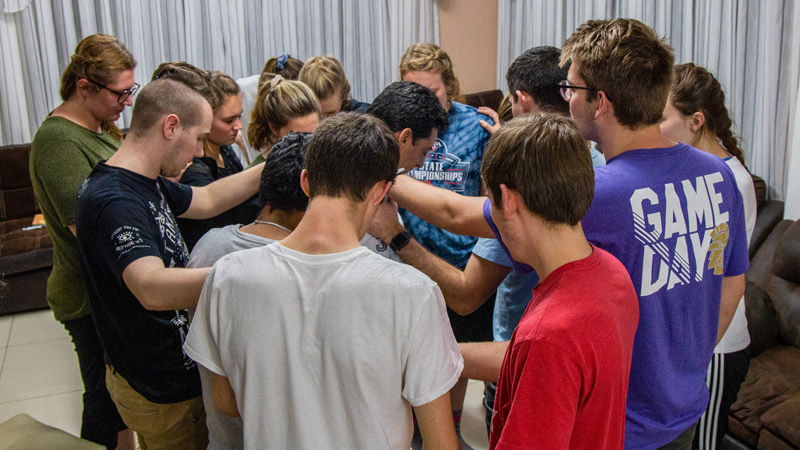 Taylor World Outreach’s (TWO) Lighthouse is a program that sends Taylor students abroad for the month during the J-Term semester. Greece, Spain, and Uganda are a few of the places that students will get to gain experience in cross-cultural outreach this year.

It's essential for students to prepare well for Lighthouse trips. In fact, if done incorrectly, traveling overseas without proper training can be harmful and offensive to the country that is being entered. Problems arise such as wrong motives for going, insensitivity to culture, lasting cultural shock, spiritual warfare, and more. TWO recognizes these potential issues, and that is why they create semester long curricula every year for students that will equip them before they embark upon their respective January experiences.

Last year, I was able to see this preparation in action. I was on a Lighthouse team, and during the fall semester every Monday, we would meet from 7-9 pm. For the first hour, all teams would meet together in one classroom to discuss general principles of short-term missions. These sessions included presentations from TWO leadership and from guest speakers with extensive knowledge in the mission field. In the latter half we would meet as a team individually.

This second portion of the meeting was two-fold. Our first purpose was studying the culture of the country intensively. This included learning about the language, geography, weather, cultural practices, food, and more. The other piece that made this hour so fruitful was that we were building team chemistry, which was essential for a successful trip. To build more unity, every team goes on a weekend retreat somewhere near the community. I specifically remember feelings of confidence and excitement after spending an extensive period of time on the retreat with my brothers and sisters in Christ.

Robert Brandkamp, a 2016 alumni, also attests to the solid preparation that Lighthouse provides for Taylor students. Robert went on a Lighthouse trip to Greece his senior year to aid in the refugee crisis. When reflecting on his experience with the program, he spoke very highly of how students are encouraged to understand their role and take time for self-examination before the trip.

“Teams focus on language learning, cultural competence, what their specific roles will be, and self-examination and reflection. This allows students to engage respectfully with their host culture and mitigates the motives of selfishness and ignorance to be drivers in the mission. Students also take time looking at how short-term missions is a biblical concept and model for us to follow as seen with Jonah, Paul, Jesus, and his disciples to name a few. Through reading Scripture and other readings specific to missions and His Kingdom, students prepare themselves in both mind and spirit, so that when they arrive in their country, they are doing so under the banner of Jesus.”

The Impact on Participants

This mindset allowed for Robert to have an experience in Greece that he would never forget. In the midst of seeing catastrophic suffering through the refugee crisis, he was able to find purpose and compassion for those who were in need of hearing the good news.

Lighthouse trips have the capability of changing the lives of students who go on them. I was able to broaden my perspective of how big God is through my trip. Robert was so impacted he returned to Greece just a year later, and next fall he plans to make his third trip to Greece for a two-year stint to continue aiding the refugees he has a passion for. “God showed me the need and showed me His heart, and ever since I knew that my life would be spent in service to the refugees of the world.” Roberts says. Many others have taken away life lessons from their Lighthouse trips as well.

These trips go hand in hand with Taylor’s mission to minister Christ’s redemptive love and truth to a world in need. As Robert reflected on his time at Taylor University, he wanted to leave a note of encouragement for students thinking of joining a Lighthouse trip.

“We, as believers, are referred to as the body of Christ. Being a part of the Lighthouse program allows us to engage with that global body and see a greater, fuller, and more diverse picture of God than before. It offers the chance to be truly humbled in the presence of God and wholly reliant on His ultimacy. It also helps to make us aware both of the needs that different areas and people groups of the world face, and how God is responding to those needs, thus opening up ourselves to the eternal work of bringing the Kingdom here. Going on a Lighthouse trip isn’t about us. In other words, we aren’t the main characters in the Lighthouse narrative, but rather Christ himself in whom all authority in heaven and on earth has been given. It is under this Name that we go, and it is this Name that deserves all the glory.”