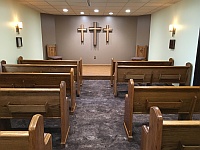 A site on the Taylor campus that was known and loved as a place of prayer by generations of Taylor students, faculty, staff and alumni has been reopened after a summer-long renovation project.

Renovations to Taylor’s original prayer chapel, located in Sickler Hall on the north side of the Taylor campus, include new lighting, ceiling, carpeting and pews, along with painting and artwork.

The newly-named Clyde Meredith Prayer Chapel recognizes the work and legacy of Meredith, who served as Taylor’s president more than 60 years ago. Since being designated as a prayer chapel in the early 1950s, the place was used by Taylor students for prayer and worship. After the opening of Taylor’s Memorial Prayer Chapel in 2008—a facility that honored the lives of five members of the Taylor community who died in an accident on I-69 in 2006—members of the Taylor community continued to use both facilities for times of prayer and spiritual growth.

“The Meredith Prayer Chapel is a sacred space for many of our alumni. They remember special moments spent reflecting, reading Scripture, and wrestling in prayer with the Lord in that place,” said Special Assistant to the President, Ron Sutherland. “Our desire was to restore it to its original state for its original purpose. We believe both the Meredith Prayer Chapel and the Memorial Prayer Chapel will provide our students, faculty, staff and alumni with special places set aside for the specific purpose of prayer and communion with the Lord.”