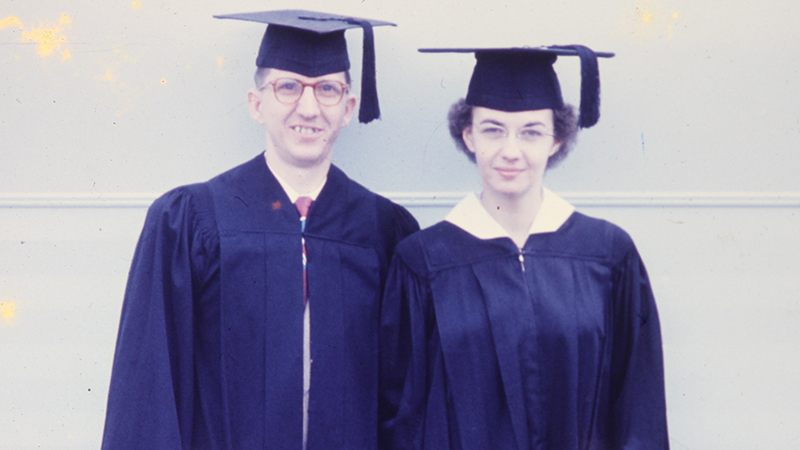 “I have been across the Atlantic Ocean 12 times, across the Pacific Ocean five times, and around the world twice,” he said.

Andy and Ella Lindvall, Taylor University alumni (’51), have dedicated their lives to the Lord—traveling, working, and living wherever He led. Andy is 96 years of age and Ella went to be with the Lord in February 2018.

Andy grew up in northern Minnesota, in timber country, during the Great Depression. He was the first of his twelve siblings to graduate from high school. After graduating, he worked in the city and then served in the Navy. It was there that he was given a New Testament which he read for the first time, even though he was brought up in the church.

One Sunday, he learned that all his righteousness was “filthy rags.” He went to his room later that day and knelt before the Lord. “Lord, I am a sinner and need to be saved,” he said. “I got up off my knees and knew something had happened with my life.”

Andy’s wife, Ella, grew up in Pennsylvania. Her dad, a cabinet maker, passed away when Ella was 3 years old and her mother passed away when she was 16 years old. Against tremendous odds, Ella lived by herself in her family home during her high school years and graduated as valedictorian.

Ella spent the next year working for $7 per week, then went on to graduate as valedictorian of Practical Bible School. After spending three years working with child evangelism, a friend offered to finance her education at Taylor University.

It was at Taylor University where Ella and Andy’s paths crossed.

“We met for the first time in the registration line. She wasn’t impressed and I wasn’t impressed,” Andy said with a light-hearted laugh. “During the next year’s summer school, we began to go together. I was attracted to her love of the Lord.”

They were engaged that fall on Ella’s birthday.

“After I proposed, everyone at Taylor knew about it just by looking at Ella’s beaming face and smile,” Andy said. “And that’s what Taylor was then and is today—friendly. Everybody knew everybody. I’m glad for that.”

They married in the afternoon of their Taylor graduation.

Following the Lord Worldwide
After graduation, Ella and Andy moved to South Carolina, where they attended Columbia Bible College. Their daughter, Marion, was born five hours short of their first anniversary.

They then moved to Minnesota where Andy remembers asking, “Lord, is this where we’re going to be the rest of our lives?” One day shortly after, Ella met him at the door with a missionary magazine that read, “Urgent need for teachers at Morrison Academy in Formosa.”

That little caption started it all. The Lindvalls moved to Taiwan where Ella taught kindergarten and Andy taught in high school and eventually became principal of an elementary school.

“Thirteen years later, we realized that we had spent 12 years in Taiwan,” Andy remembers Ella saying.

The Lindvall family then moved back to the U.S. for a few years before they received their next calling—to work at a school in the Middle East. They spent three years teaching and living in Abu Dhabi where they learned to appreciate the Arab culture before the Lord brought them back to the states.

Andy would go on to work as an instructor and registrar at Moody Correspondence School, and then at an inner-city Christian school during a time he considered, “the best part of life.”

Ella worked as an editor for Moody Press, where she received her first writing contract. The leadership team one day suggested that someone write Bible stories for preschoolers. Ella went back to her office, determined, and wrote a sample story. Fifteen minutes later, the contract was hers. Ella’s Read-Aloud Bible Stories have now reached many parts of the world and are available in English, Japanese, Korean, Hungarian, and Indonesian.

“Why the Lord gave me such a wife is beyond me. We never argued; we agreed on everything. She was humble, never dominating, never combatant, always accepting of God’s direction in every move,” Andy said. “Oh how I miss her! She loved the Lord. She got to see Jesus before me!”

Daily Time with the Lord

“‘God so loved the world’—that got to me one day,” Andy said. “Not just Chicago, Taiwan, the Middle East. God loves the world.”

And now, Andy takes responsibility for praying for the world. He follows the Operation World prayer guide and prays for countries every day. “The Lord has laid it on my heart to pray for these people,” he said. “For God so loved the world…”

In addition, Andy does his own daily Bible study and writes out his devotionals. “How can you live without reading the Bible every day?” he asks.

“I want to know Christ—yes, to know the power of his resurrection and participation in his sufferings, becoming like him in his death.”—Philippians 3:10

On Living Life as a Biblical Steward

For those striving to live life as a biblical steward, Andy encourages, primarily, to learn to get into the word of God every day. To read the words slow, and not to rush.

“For years, I read the Bible each year cover to cover,” Andy said. “I don’t anymore. I’m not in a hurry. I’d rather take one verse at a time and see what it says.”

Now living in Arizona, Andy stewards his days reading his Bible and teaching a weekly Bible class at his retirement community.

We invite you to learn more about what it means to be a whole-life steward of the time, talents, relationships, and treasures God has entrusted to you.

Biblical Stewardship—or Whole-Life Stewardship—is a ministry provided by Taylor University to our ministry partners. Find out how this concept could radically change the entire trajectory of your life.