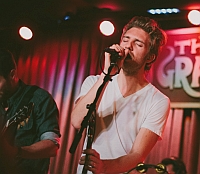 Singer/songwriter and Taylor alumnus Andrew Belle will perform in the Rediger Chapel/Auditorium at 9:00 pm, Friday, Nov. 17. The concert marks a return to the Taylor campus for Belle, who graduated from Taylor in 2006.

Belle launched his solo career in Chicago in 2007, and released his debut EP All Those Pretty Lights on September 9, 2008.

In February 2010, Belle released his album The Ladder, which featured his single In My Veins –  a song that has since been featured in episodes of four different popular televisions series, Grey’s Anatomy, Castle, Pretty Little Liars and The Vampire Diaries.

Tickets for Taylor students, faculty and staff are $6.00, and general admission is $10.00. Tickets can be purchased at Taylor's Event Brite page.